We made some progress today, and caught a quick break to get on the dyno. Bear in mind our goal was to see if this could do double duty as a reasonable mid range system with upgrade potential, vs a maxxed out system right out of the box. All testing was done on e70, now that we have a sense of where the ignition timing is falling in, we will put pump gas in and watch the knock counts. For these dyno graphs, we added timing primarily to the e85 side as to make sure on pump we don’t run into issues. On with the show….

Strapped down and ready for action: 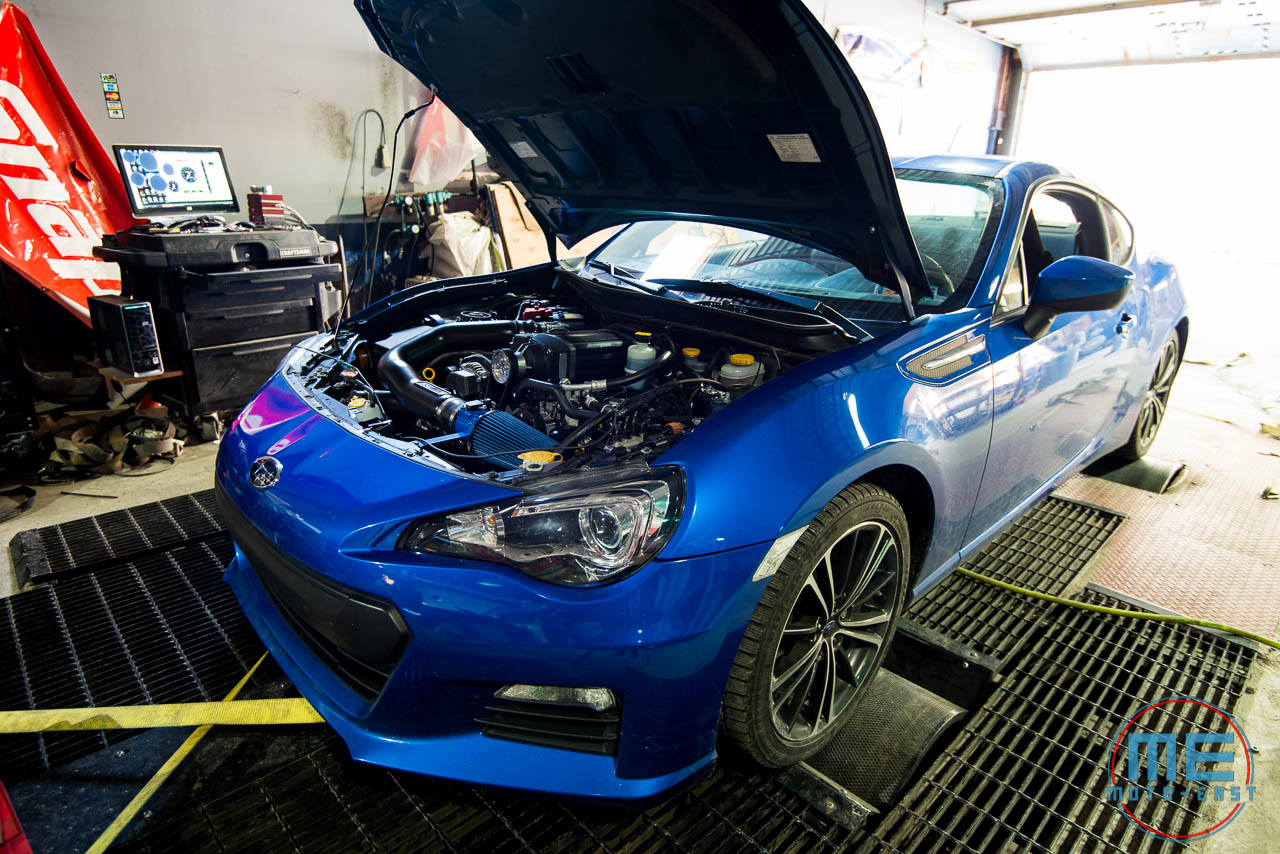 This is our initial baseline taking the 210 tune, and taking out some timing (a good amount…)

You can see that the power is super smooth and comes on EARLY. This is a torque curve of a strong OEM v8. Did I mention this is on the “low timing” map? Difference is about a couple degrees. Next step is to give it a bit more timing.

Picked up a bunch of mid range with just a small change. This is showing some potential. However, in light of the relatively “low” numbers (I’m brave until about 300 tq on the stock motor) we rolled back some of the cam timing changes so that it can generate close to full boost. This is the result of the subsequent run. Unfortunately the bypass stuck for a second or two, so all the subsequent runs will be best compared at 3500+.

Now we’re having some fun. You can see the gobs of torque we picked up, and this was a relatively minor change. We’re still not at the cam timings we used on the 210. Speaking of the 210, how does that compare on a dyno that reads about 5% higher than this one?

You can see the 335 absolutely destroys it. The 210 plot is on e85, full bolt ons, 70mm pulley, etc…the 335 run is on an 80mm pulley and a mostly stock car with a stock header and cat back on e70. We did change out the front pipe/overpipe since we had the trans off to get the clutch, but those won’t do a damn thing with a stock header and cat back. So there is still a whole lot left on the table. Our experience is that the 70mm pulley should generate about 15% more HP for a given boost level, and the stock header and cat back are surely a major restriction here. But since our goal was to see if a mostly stock car can handle it, this is exactly why we put it back to stock and wanted to test this way.

Now a few more comparisons. This is a 335 vs a turbo kit. Goes to show you that not all HP is created equal, and here particularly despite the equal HP, only one smokes the tires a gear early

We installed a 3 bar MAP sensor to see where the boost is. Drawing a line from the somewhat bumpy boost plot (due to the MAP source being close to the runner) we see that it peaks around 2.25 bar. Certainly a lot to ask of a stock motor. 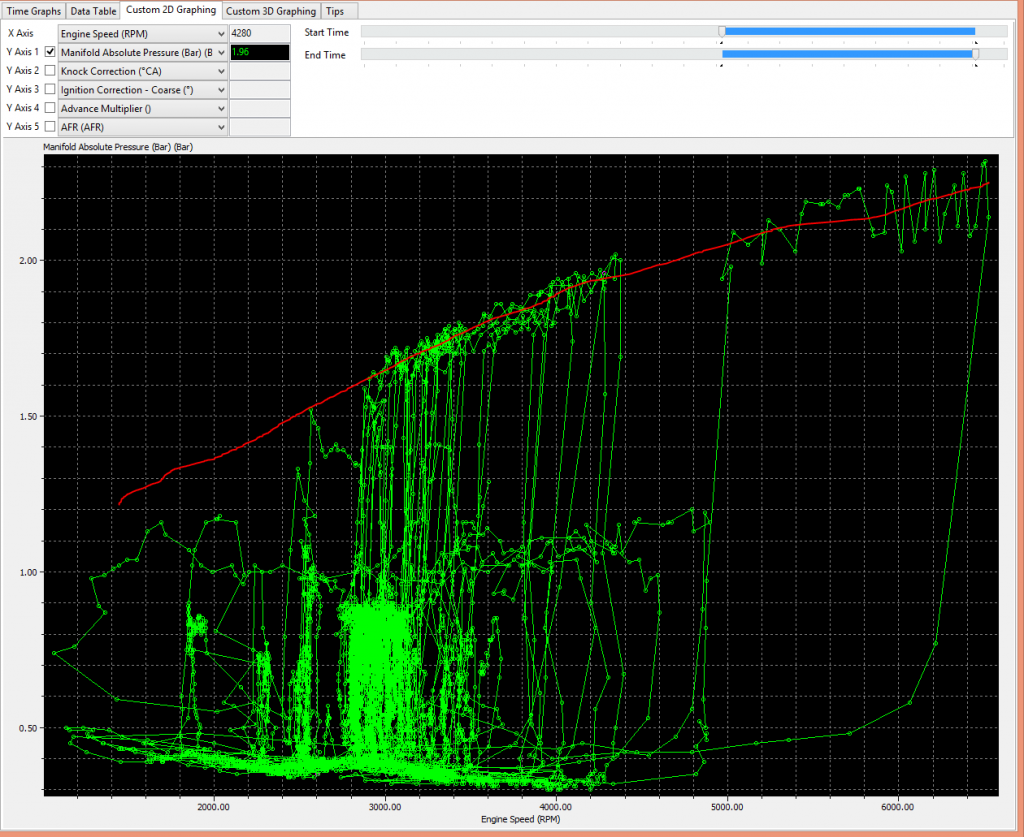 Also as we transition to pump gas, this is some data we have from the ProECU datalogs. On the first image below, you can as the ethanol content drops (CPS voltage) from e70 to e30, the knock counts go up significantly. This is because of the fact that we’re running such high boost levels, that the standard timing difference for the two fuels is not enough. At 18 psi the FA20 is much more knock prone on pump vs e85.

Update 01/2015: Continuing to fine tune the pump gas tune. At this point the car is driving just fine on pump gas, we’ve been getting on it without any worry. With how much power it makes and the current cost of fuel, pump gas is actually a pretty reasonable option with the right tuning.

Also a comparison that shows how peak numbers have nothing to do with how a car drives. Only 13 peak HP apart, but what would rather have? 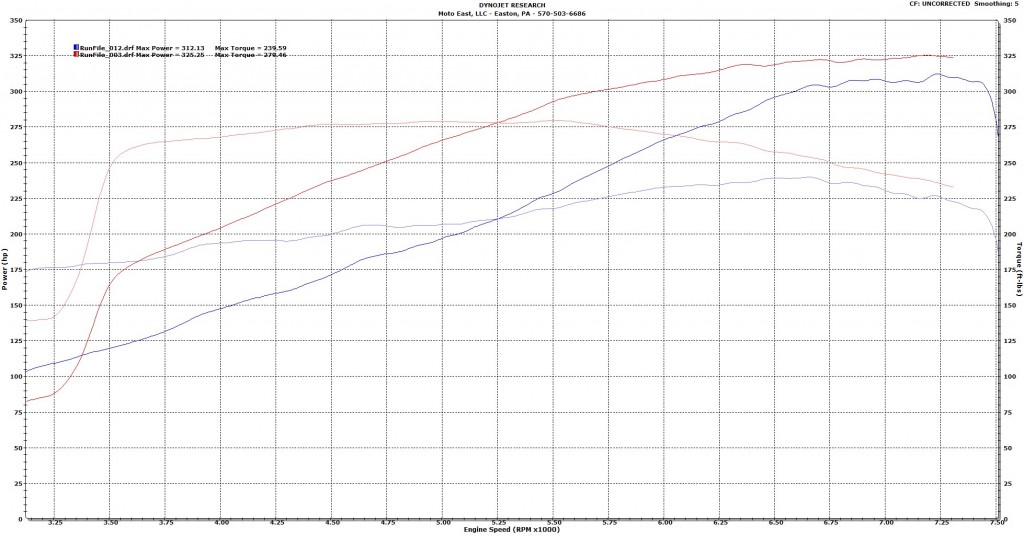