motoadmin Posted on March 18, 2016 Posted in Tech, WRX/STI/FXT No Comments

R&D is not cheap, but looking at data only tells you so much so we regularly push our cars as much as possible. Then we can find out the limits before we send any tunes out.

In this instance we were in the process of testing exactly how much boost we could get away with on as low of an e-content as possible, and at 27 psi we found out. 40% and 27 psi. A single pre-ignition event lead to head gasket failure that blew out a freeze plug in the head, which then turned the oil into a milkshake and instantly took out everything but the rods and cams. Worst possible time too as we had 3 customer FA20’s waiting and we knew we weren’t going to get to rebuild it for a good while. We put that time to use though. Knowing that the WRX heads likely flowed poorly based on just eyeballing them, we spent some time working on the heads to see how far we could go without going as far as moving to BRZ heads. While the D-4S toyota heads are incredible, they make the whole thing quite expensive. Instead we tested the stock WRX, BRZ, and mild port WRX, and then mild port WRX without the metal splitters. Here’s the data utilizing stock valves: 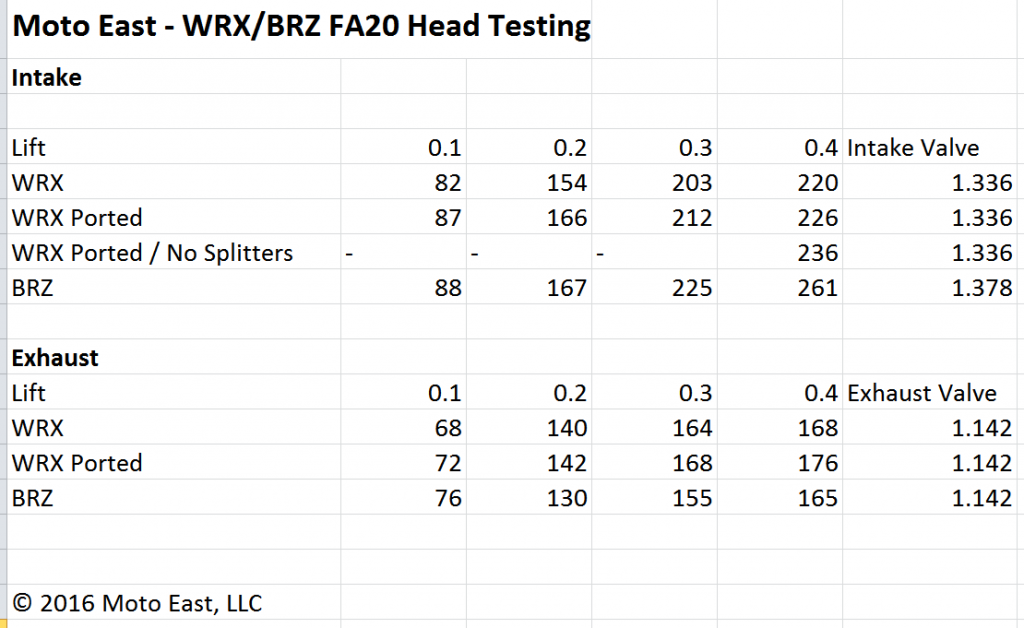 The flow numbers show that it is likely very worth the effort. Once we get it back on the dyno we’ll know for sure. From purely a financial standpoint, this is achieved for around $500, versus $1000+ for BRZ heads. Obviously the overall cost to convert to the BRZ setup is much higher than that. Not surprisingly the exhaust side is near identical.

Given the turbo we selected is the GTX3076R, with this, WMI, and an auxiliary injector setup we should now be well equipped to push 24-25 psi to 7500. That ought to put us right at the GTX capacity of about 450 torque and 550 hp without hopefully resorting to race gas. With 40% ethanol we should be able to get similar knock resistance to 98 octane, and with WMI/auxiliary injection push it even further.

Anything bigger than that then likely a BRZ head conversion would make a lot more sense, but who knows. If we can keep making power without having to ramp up boost with revs then we may be able to break 550.